Starting at Clevelode and Ending at Stourport 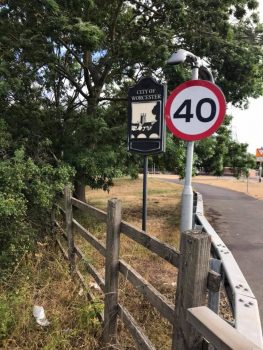 Leg 21 20.6 miles 345 feet.
Back at it.
After a busy few days ,with early get ups for the European bonanza that was watching the mighty BFC, the alarm going off was greeted with swear words of the best order.
But the beauty of this challenge is that it pulls you along, I feel that the more you do the more respect the walk gives you, it’s as if it says “ok you have done x then I give you the respect of Y”
I know we are pulled along with all the fantastic support that you are… giving and as importantly the CF suffers that we know and who have contacted us.
A few photos from today most are self explanatory but you will see Lamb holding one of our cards, these are just sayings we have in the Van and every now and then one of us will pull out one of the sayings.
I suppose it’s a bit deep but it all helps toward the end goal.

As an aside, walking through the city of Worcester today, at the church while photographing some of the many art giraffes around the town ( I know it’s a bit surreal) a guy came up to me and had the biggest smile ever. He got chatting, he was so surprised that we were walking the length of UK for CF he , as a lot do , have a donation, then said well my son has CF. OK, I said how is he, the guy said ,he is ok but won’t go on the register. I tried to quiz him a little with out prying…. it transpired that his lung function is very very poor. His words were his son has half a lung. I said why does he not go on the register? His answer shocked me, he said his son has done so much and wants a younger person to have the set of lungs, so they could have a full life.
Ask yourself the question, if you were 32 and had the chance of X number of extra years if you had a lung transplant would you or would you pass that opportunity to a younger person?

My first thought was brave then Lamb said he must be selfless, either way what a man a real man, and what a father to have such pride in your son.
Track of the day.
My sister always had northern soul blasting from her bedroom……..for which I am very great full but don’t tell her!!

Judith and Kate Goodway - friends of Steve's ...many thanks to them - we still have a couple of legs left if anyone wants to sponsor the final ones ...just get in touch and we'll put you down - £100 ....all sponsors will be published at the celebration party on October 12th too!

“My name is Victoria Martin. In a few weeks I’ll be 40 years old and this is my experience of living with CF.
I was born prematurely and I spent many weeks in a loca…l hospital for failure to thrive until I was six months old when I was diagnosed with CF. After being diagnosed I began attending the regional centre for CF in the RVI in Newcastle.

I had a lot of chest infections for which I received antibiotics and was treated for bowel blockages but I was never hospitalised. My parents had do physiotherapy sessions with me twice a day which I hated. However despite my diagnosis I was always treated as a normal child not a “child with a disability”.
I also hated taking the medication which meant I had to have the medication enzymes sprinkled on my food and my parents had to use MCT oil for cooking. I had a very strict diet until my parents attended a seminar held by a consultant from Canada where they learned that I could eat what I wanted to and just take extra pills. This made the CF easier to live with as I began my teenage years.
As a preteen I was very well tested which confirmed it was definitely CF. It was discovered that I had inherited a very mild mutation of the gene from both parents which is quite rare. As I moved into my teenage years I continued to have problems taking my tablets which lead to my mother refusing to give me the medication and the doctor discontinuing it as long as I did not get any worse.
When I was old enough I was transferred to the adult clinic which I have been required to attend every three to four months since to ensure I remain fit. Over the last forty years I have looked back and realise how lucky I am to be so well, as others have not been so lucky.

Thank you so much for doing this walk in aid of Cystic Fibrosis Steve which is raising money and awareness. And also thank you for allowing me to share my story. All the best for the rest of the walk. You can do it!!! Thanks”

Back on the beer – got a taste for beer in Aberdeen. 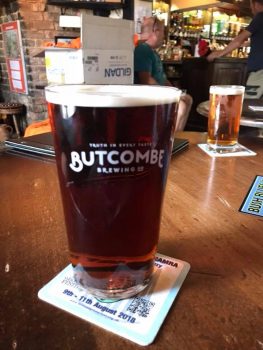