Starting at Peebles and Ending at West Linton 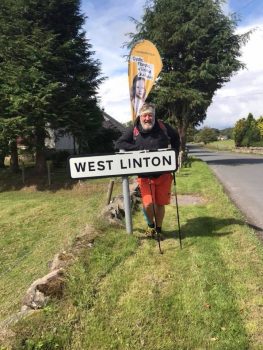 Why are Mushrooms so different…….

We have seen hundreds of different types of Mushrooms every colour you could think of, shape size and they all look so delicious, but what is safe to eat I believe some will kill you, some will make you hallucinate some will make your bits not work!

There must be a course somewhere I can do when I get back to ensure I don’t die.

For the last few days we have been on the Cross Borders Drove Road, to be honest we have not given it the credit it deserves it’s been a good sturdy companion for us since Hawick so a couple of photos.We get somewhere near Edinburgh tomorrow which is well……just unbelievable to be honest, the next 8 or so days are going to really tough as we pass over the West Highland Way ,I feel it’s the last real hurdle…… then……well let’s not go there yet.

Me and Lamb have kidnapped Sam and I will tell you the Ransom, his mum the other day brought some home made flap jacks so Janet Bainbridge…. the deal is this ( I know Janet reads this so called blog!) make us loads of Flap jacks send them to a camp site where we are staying and you son will be released, don’t and we will …..well you’re better off not knowing……… ???? So Janet?

Track of the day tough one this, and it will be a shock to lamb, I had this track blasting out some nearly 40 years ago, when I fell in love for the first time, it was at Read cricket club disco, she was older then me by a few years, she made a real move on me at the time I was clueless, but the night ended up with me turning from a boy into a young man at 13! I was head over heals, two weeks later she was killed in a car crash, it sent me off the rails for a few wild years, until I met Lamb but the track still holds a small place in my heart.

Leg 42 of LEJOG is Peebles to West Linton and sponsored by the brilliant band The Wrangling. The Wrangling played at the ‘Wear Yellow’ event at The Dog Inn Whalley in June where they also very kindly gave us an extra donation and will also be playing at the celebration party for Steve in October! www.thewrangling.co.uk The Wrangling play covers from the Punk era (The Jam / The Undertones) right through to today (The Vaccines / The Black Keys) covering mainly Indie / Britpop bands such as Oasis / Killers / James and some other well known but forgotten stomping classics by The Cult / Killing Joke / The Cars / Feeder / The Enemy / the Only Ones etc..brilliant! Having spent a year as a bunch of mates jamming for fun in a little room, the urge to play live was getting too great for some whilst the ambitions of others were maybe not as high – band members came and went – nobody could agree on a name then the Keyboard player left followed by the Singer which put an end to the fun! There have been a few different line ups over the years but the guys who are together now are the perfect band if you want something a little different for your event, wedding, party or function. They play a diverse range of Indie, Rock and Classic covers, and I can vouch for how good they are - as well as being a great bunch of guys ...looking forward to seeing them again in October!