Starting at Watten and Ending at John O'Groats 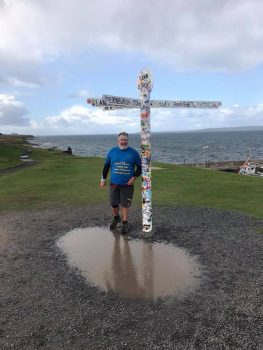 This journey has been, well unthinkably wonderful, difficult, painful, easy,… I feel we have had every emotion under the sun.

Day 3, I had blood running down my ankles from the blisters.
The muscle pain that Denise Park sorted was so close to stopping us, the pain in my feet has been the worst thing ever but help from Antony Hughes has kept them going.
One thing I can be honest about is at no time over the last what ever number of days, have I ever said I am not doing this anymore.
At no point have I ever thought I am giving up; for that I am proud. I am proud of the people I have jumped on and bombarded with facts about CF, I am proud to know so many people who care and I am amazed at the support we have received.

Leg 31 for me was just great. Seeing so many people going in the same direction…not direction as in way to go but oh you know what I mean.

The lady who had so much composure having lost a son to CF and a daughter still living with CF will spring to mind, whenever the word bravery is mentioned.

I have discovered that CF is an invisible illness, but I tell you what the people I have come across who have had dealings with CF have been so dignified, such strength of character, you show them that you are part of the CF family and they stand with you regardless if you have a family member with CF it’s just a glue that binds us.

I can’t say a lot about the walk today or the last Few days I have had my head right down and walked an unthinkable amount of miles but, as painful as it has been at times I thank my lucky stars I don’t have CF.

Last four songs, I have loved the track of the day some of the requests have been fab some well……… the last four are from Gail, Garry me and my son Dominic

Gail, it says it all.
https://m.youtube.com/watch?v=nCrlyX6XbTU

And a last minute request from Thomas’s Dad
https://m.youtube.com/watch?v=i_2mWhfOhGU

Mine I have left my Fav till last, was a very dark time in my family’s life. A lot of bad stuff was going on, lights in cars being smashed on drive bad men talking to you, it was very very dark, I was working away lamb rang with more bad news, I had no answers, I opened the curtains this track came on the radio and it went uphill from there, I learnt no matter how bad it gets keep strong and hold on to the one thing nobody can take off you, ever “hope”
Deep yep but that’s just me at times.
https://m.youtube.com/watch?v=0NFV8dHrZYM

So what now? Well I will rest for a week or so, these tired bones need to recoup, then well, I have not run since Boxing Day due to training for this LEJOG type thing. I am desperate to get back on Pendle covered in mud so I am going back to running club and doing a C25k just to get me going again, not bothered if I am doing it by myself just want to be back at the club and run again.
So thank you for all the support thank you for being part of this what ever this is.

The title at the top of the page is wrong, it’s not the end it’s the end of a small battle the war continues like I have said all I do is carry the Baton, till such time as I can’t or CF no longer matters.
One day CF will stand for CURE FOUND

The End or is it?

Please keep an eye on this for a week or so something else is going to happen that will have some tears and smiles from most.

Don’t forget the 12 October it will be great night and the final total will be revealed it’s going to be a whopper!
If you are a Claret keep an eye on the Bournemouth game!

So that’s it for now it’s onwards and downwards to God’s county Lancashire, foot note we have made it to Pitlochry and I am reading some messages it’s been hard to get to phone, now I said I was holding my emotions, I am not now!!! Feck!

Something that has just hit me was a quote I read today “Permanence, perseverance, and persistence in spite of all obstacles, discouragements and impossibilities: It is this, that in all things distinguishes the strong soul from the weak.” Thomas Carlyle. You Steve are that strong soul

Made me cry….
I am just trying to help that’s all, I don’t feel I have done anything, just tried to let people know that Thomas and others just don’t deserve this illness.
Others think I have maybe done some good I maybe have to listen to them… just had first pint did not touch the sides…. few more then sleep with no alarm, then Home xx

We have joined a very special club, who’s membership is limited, one of the joining criteria is “doing it for others” we are in it.

Mascara warning for the video below of Steve’s final steps! 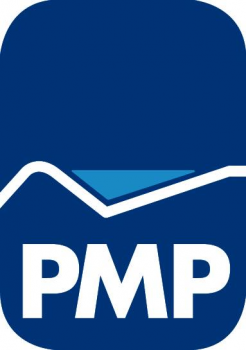 Today’s leg is sponsored by Steve’s company, PMP Utilities. In 2015, PMP moved to new purpose designed headquarters in Burnley. These substantial new facilities highlight our continued commitment to support our clients throughout the utilities, power and processing industries. The new premises house our new engineering workshop, equipped for bespoke milling, turning, welding and fabrication, along with large dedicated and secure internal and external storage. The new headquarters also contain purpose built mobilisation and welfare areas and new office and training facilities. This considerable investment by PMP will provide even greater certainty in our capability and allow us to take advantage of new opportunities for growth within AMP6 and across all industries. Everyone at PMP is extremely proud of Steve and what he has achieved during this walk to raise funds and awareness for CF. We are looking forward to having him back at work but, hopefully, we won’t need to see his feet! 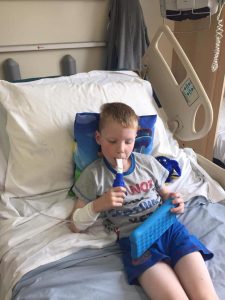 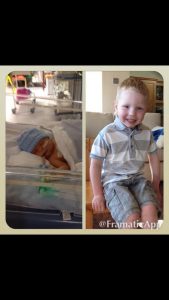 Our son Thomas Joseph Taylor was born on Christmas Day 2011 at Burnley general hospital, everyone was happy and all seemed fine until it was noticed Thomas couldn’t keep down his milk or open his bowels. I returned to the hospital on Boxing Day as the proudest dad in the world, on opening the door to the room where Louise (mummy) and Tom we’re supposed to be I was just greeted by Louise who informed me that T…homas had been transferred to intensive care. We were quickly rushed over to Manchester children’s hospital and a couple of major surgeries were under taken. Testing for CF was mentioned after the first surgery, our knowledge on this was very small and looking back I guess we didn’t want to believe it either. We kept our fingers and toes crossed for good results to come back. The next month was spent between ISC (intensive care unit) and HDU (high dependency unit) then back to a ward then back to ISC and HDU and so on and so on it was a rough time, and during this time we made a decision to have Thomas baptised. After three months a sweat test was taken and confirmed that Thomas had Cystic Fibrosis, after four months we left Manchester children’s hospital to all come home together to start our home family life. Thomas has picked up infections and had numerous periods in hospital, he always remains bright and cheerful and has a smile to melt any girls heart. I sometimes think he’s stronger than me – he is our little CF warrior. Thomas is now in Year 2 in primary school and in progressing in leaps and bounds. He has a wonderful caring family all around him who love him dearly. Thomas has become quite a pro on his little motorbike and pushbike and he also has numerous hobbies including swimming, jujitsu and playing out with his friends. We were as a family very naive to CF and it was a complete shock to find out the gene was carried by both sides of the family. Together as one we will fight to kick CF’s ass and give our boy a life beyond his wildest dreams.

My dad has always been an inspiration to me and I guess he is to many more now as well. We are all so proud of you grandad Ram. Love you loads dad.